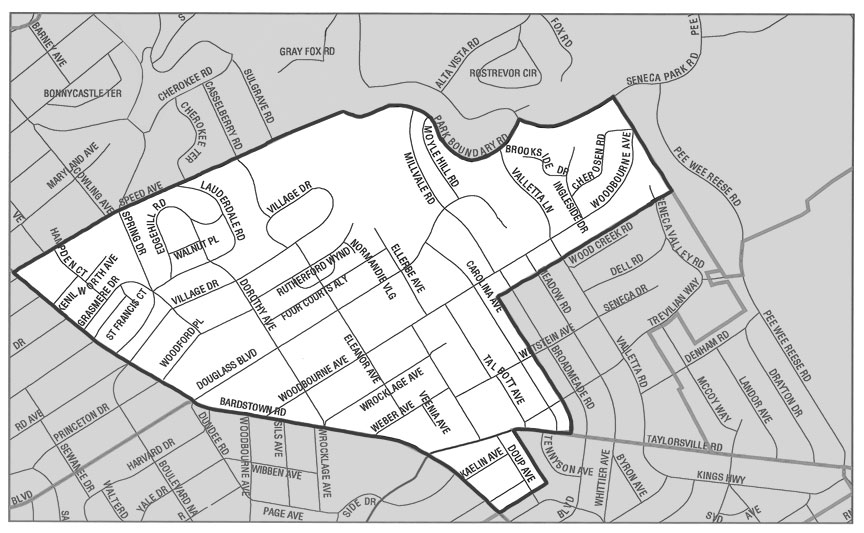 The Highlands-Douglass Neighborhood Association (HDNA) is a community organization overseen by a 16-member board elected by its members at the annual meeting. The board oversees several committees which work in specific areas to serve the neighborhood. Committees include: Beautification, Communications, Events, Membership and Safety.

The Highlands-Douglass Neighborhood is located in Louisville, Kentucky.  Highlands-Douglass is one of a string of neighborhoods that emerged during the early 20th century as growth moved outward from Louisville’s central business district as trolley lines were extended.   The original core of the neighborhood was an estate of approximately 200 acres known as “Woodbourne”, established during the 1830s by Starks Fielding, a Mississippi cotton planter. The stately mansion house remains today at Douglass Boulevard and Bardstown Road behind Douglass Boulevard Christian Church.

The area consists of a vibrant mix of residential, commercial, and institutional uses, and is considered one of Louisville’s most sought after areas to live, work, and play. The neighborhood is generally bounded by Speed Avenue (north), Cherokee/Seneca Park (east), Eastview Avenue (south), and Bardstown Road (west).

At the turn of the 20th century, the area within the present day Highlands-Douglass neighborhood was home to rolling farmland and scattered family farms and estates.  In 1912, the extension of the streetcar line along Bardstown Road to Douglass Boulevard (Douglass Loop) brought development with it, and over time the land was divided into what became the subdivisions of today.  At the turn of the century, part of the Woodbourne Estate  property, including Big Rock, was donated to Cherokee Park. The remainder of the property was subdivided as Douglass Park subdivision.

The western portion of Highlands-Douglass developed more quickly than the eastern portion. In addition to being on more level terrain than the eastern portion, the extension of the Bardstown Road streetcar line in the early 20th century was the largest factor behind this growth in development.  The original Douglass Park subdivision was carved into several smaller subdivisions prior to World War I, when development of the area slowed. The 1920’s, however, saw a building boom in which more than a dozen new subdivisions were platted. The names of the subdivisions and their developers are reflected today in the familiar street names of the neighborhood: Lauderdale, Woodbourne, Kenilworth, Weber, and Kaelin. The  housing styles in these subdivisions most likely reflect the socio-economic status of the original residents and the people to whom the new homes were marketed. Large historical revival homes (colonial, Tudor, etc.) in the western portion suggest an affluent upper-middle class population; while the bungalows of the southern portion, near the intersection with Taylorsville Road, indicate a more middle class population.

In addition to containing more elaborate homes on larger lots, the western section of Highland-Douglass featured a street pattern which represented a departure from the grid style subdivisions that were popular at this time. In addition to showing a greater respect for the natural topography of the land, there was a growing trend around this time towards subdivision design which included large lots, encouraged natural topography, and preferred street patterns which discouraged through traffic in residential neighborhoods. This proved to be more profitable in the long run as well as more appealing to affluent home buyers.

The area which made up the eastern portion of the Douglass Park sub- division developed more slowly than the western portion. Most of this area was subdivided between 1938 and 1952. The prevalence of more contemporary style homes and ranch houses along with the occasional historical revival home along Carolina Avenue, Moyle Hill Road, Mill- vale Road, and Valletta Lane are an indication of the numerous subdivisions and re-subdivisions that took place.